The development of the School has not been without its challenges and we think it important and instructive to record some of the disappointments and setbacks during the past thirteen years.

After the first classroom was built, we had the brilliant idea of planting trees all around the perimeter of the School grounds. A big mistake! It was impossible to water these trees as they were so far apart and a long way from the nearest tap. When Sandy made an impromptu visit during a time of drought, she found a local farmer had opened the gate and was grazing a herd of cows and goats in the School grounds ….few trees survived this onslaught! 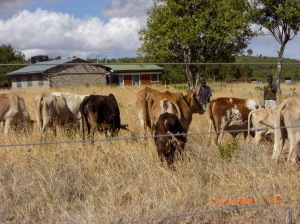 When the borehole was sunk, the contractor installed a header tank on a twelve foot high tower with a wooden platform. Unfortunately, there was a miscalculation as the tower collapsed under the weight when the tank was filled with water. Both tank and tower were destroyed. It subsequently turned out that the water pressure from the borehole itself was sufficient so there was no need to replace the tower only the tank ! 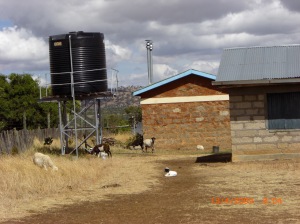 On our first visit we found that the school meals were cooked on an open fire which consumed masses of wood and produced a lot of smoke that made it hard to breathe. Lewa were excellent in finding and installing modern very efficient wood burning cookers. Sadly no training was given to the cook who stacked the cookers full of wood generating such a high temperature that the metal floor of the stoves melted! We were fortunate that Sandy found a specialist who cleaned the stoves and trained the cook who now keeps them in immaculate condition and can produce large quantities of food using just a few sticks.

The first classrooms had wooden frames supporting the corrugated iron roofs. Unfortunately the wooden purloins twisted in the intense heat of summer which caused the roof and the gutters to buckle such that the gutters were no longer aligned with the storage tanks and a lot of water was wasted. All the new classrooms have steel framed roofs which are more expensive but much more durable.

A few years ago the electric perimeter fence was not properly maintained and lost power. An elephant got through the fence, ate all the vegetables and caused havoc in the garden.

It was our original intention to educate the children until the age of seven when they would be eligible to attend the government primary school in the nearby village of Ethi. The first cohort duly left Enaikishomi but were back within the space of a week complaining they were far in advance of the other children and were learning nothing new. In any event, they much preferred being at Enaikishomi ! This example of pupil power was supported by the parents so we agreed to double the size of the School and educate the children until the age of fourteen (grade 8). We were victims of our own success.

The School has an excellent team of enthusiastic and committed teachers. However, over the years, there have been some difficult personnel issues resulting in the dismissal or transfer of three headteachers and one deputy head. Whilst painful at the time, these changes facilitated the appointment of an experienced head teacher, Anthony and deputy head, Benjamin. We are now confident that the teaching staff are all working well together.

On one of our many visits to a nearby lodge, Tassia we admired the buildings which had been made using sun dried bricks. This method of construction could lead to important savings as it needs just earth mixed with a little cement and would eliminate the significant costs of transporting breeze blocks to remote locations. We thought this would be a great way to involve and pay members of the community in constructing new buildings at Enaikishomi. We therefore invested in a brick press for the School. 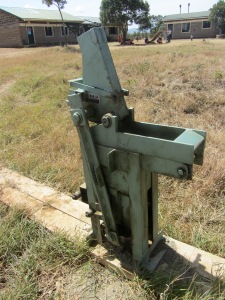 The first trial was a success due to the enthusiasm and managerial skills of a gap year student, Ben Robinson who organised the construction of a new toilet block. This was followed by two beautiful classrooms built partially by local people, working under the direction of a skilled contractor, Martin Wheeler. This was a great achievement and we commissioned Martin to build a further two classrooms using this method.

However the cost savings were much less than we had anticipated as the soil at Enaikishomi was not suitable and had to be brought in. Subsequently, there was some deterioration in the external walls caused, so we were told, by the children. On a return visit we were disappointed to find that one of the large 25,000 litre brick built water tanks had developed a leak. The other one was full of water but, owing to a misunderstanding between contractors, had not been connected to the drip feed water system in the adjacent school garden! These teething problems were sorted out quite easily by the logistics department at Lewa. 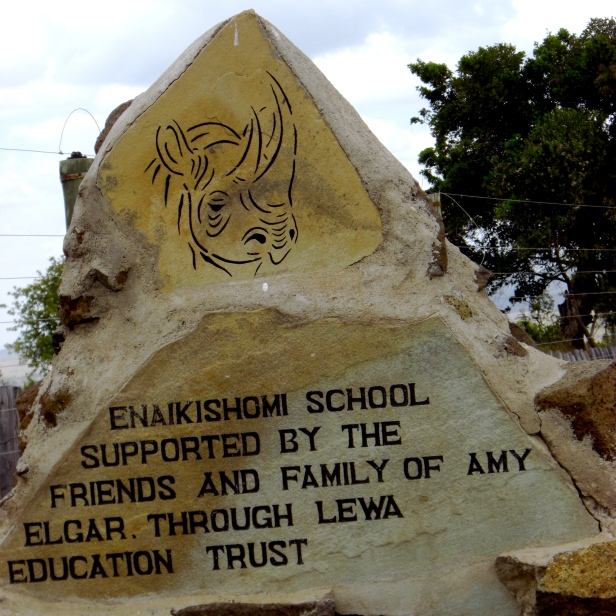